Thoughts on a Friday ('night Mother)


I don’t understand the decision to take your own life and I probably never will.  Twenty-eight years ago, I was a new mother and I was overwhelmed by all the new responsibilities that I had.  I was single, and I didn’t know how I was going to handle everything on my own and I briefly contemplated the thought of ending it … at that moment my newborn son cried. I immediately thought to myself, If I leave, who would take care of him?  He literally saved my life that day and I have never considered it again.  I don't believe I have ever told anyone that and I know that I never shared how overwhelmed I was at the time with anyone in my family.


A while back I watched the movie ‘night Mother which is about a woman played by Sissy Spacek who made the decision to kill herself. 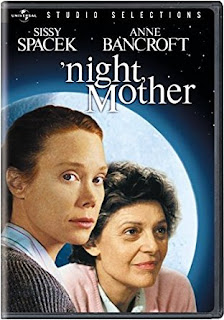 She developed a very detailed plan and she shared the plan with her mother played by Anne Bancroft.  The entire movie was a conversation between the daughter and her mother:  The daughter explaining what she was going to do and everything the mother would have to do afterward; all the while the mother was trying to talk the daughter out of it and providing reason after reason why she should stay alive.


As I watched the movie, I thought to myself that the daughter did not seem mentally ill or unstable.  She planned out every single detail.  Not only the details of how she would commit suicide but also of how her mother would run the household after she was gone.  She was lucid.  She was not hysterical.  It was almost as if she was planning an extended trip out of the country.
The reason she gave for wanting to die was simple:  she just didn’t want to live anymore.  She was done.  She had had enough and was ready to leave.


I can’t help but wonder … is everyone who commits suicide mentally ill?  Or do some people just feel like they’ve done all they care to do in this life and it is time to leave.


I realize that the overwhelming opinion is that suicide is the most selfish act a person could commit.  After all, what about the people they leave behind?  Don’t they count?  I suppose they do but nowadays aren’t we constantly being encouraged to take care of ourselves first?  To be responsible for our own happiness?  That doing things entirely for the sake of others is detrimental to our mental health?


What about the people who battle cancer and decide against treatment?  Should they go through chemotherapy and radiation for their loved ones even though it goes against what they want?  On a personal note, I watched someone fight cancer for years – taking every single treatment available, and it appeared that the treatment was making them sicker and weaker than the cancer.  I suppose I can’t realistically say what I would do because I’m not in that situation, but I believe I would be the one to turn down treatment.  Why?  Because I don’t want my loved ones hanging around for years watching and wondering when I’m going to die.  Fuck that.


I cannot imagine what would make a person decide to take their own life.  Since I don’t understand it I choose not to make judgments.  What I choose to do is check on my loved ones and make sure that they are okay and let them know that I love them and that if they ever need me, I’m here.
Posted by chele at 1:57 PM